I can't believe it's been so long since I've written. I knew it was a long time, but nearly a month? Loooong.

It's been an up-and-down month, with doctors giving sometimes conflicting information, my hopes going up one day, crashing down the next, DH doing his best to be the stable rock I hang onto when it all gets to be too much. Nothing else to do but wait and see how Zoe is once she's born.

Did I mention we picked a name? Zoe Francis. Zoe because we like it and because we like the meaning: Life. Francis for my dad, even though he never went by that name and always used Frank instead. We had an ultrasound a few days ago and saw Zoe kicking her legs, flexing her feet...DH even thinks he saw her curling her toes, though I have no idea how he could have possibly seen that on the grainy black-and-white sono screen. Still, it's good news. And I feel her kicking now, annoyed by the pressure of the edge of the laptop on my abdomen, right above her legs. Kick-kick means nerves that work, nerves that are getting messages from the brain to the body, all the way down the legs and to the feet. I have to stop myself from deliberately poking Zoe, hoping she'll kick back. Just three more months to go.

I've been working on a blanket for Zoe. It's alpaca, Knitpicks Decadence in a deep wine-red color, made from the February baby blanket pattern in EZ's Knitter's Almanac -- double knitting, which takes twice as long but results in a blanket twice as thick and soft, bordered all around in garter stitch. Simple and beautiful. I'll have to take a photo to post.

And one more thing, a special treat for myself, something I started working on before I found out all this about Zoe, something that just arrived in the mail the day before yesterday and that stunned me with its beauty and craftsmanship. 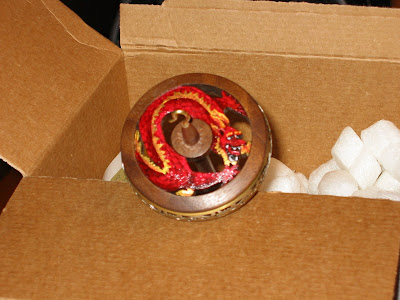 It's a Golding custom spindle, and the slightly out of focus photo doesn't even begin to do it justice. It's a Chinese dragon, a design I worked on with Tom Golding over several weeks, tweaking it until it was just right, picking out the perfect vintage carved silver ring for the outer edge, choosing the wood -- dark walnut -- and the paint colors, everything, and still it came out so much more beautiful than I imagined. You can't really see in the photo, but the dragon is covered in tiny painted scales, he has little flaming golden eyebrows and a shot of fire coming out of his mouth. Even the claws have been individually carved out of the wood, one by one.

Chinese dragons bring good luck. My spindle couldn't have come at a better time.
Posted by Splindarella at 11:31 PM

I'm so glad you updated! I've been thinking about you a lot lately, wondering how things are going. I'm really praying for you and your baby.