Just yesterday I was reading Crazy Aunt Purl's blog post about the zen of deep cleaning and thinking, "Wow...why don't I do that?"

Well. Be careful what you wish for is all I can say.

This morning I woke up to DH saying plaintively from the kitchen, "Oh, no." DH, as it turns out, had discovered a big honkin' puddle of water in front of the fridge, the very same fridge that busted a water line not once but twice and flooded the out-of-sight area behind the cabinets so badly that it collapsed the ceiling in the garage. A puddle in front of the fridge is very bad news in our house.

DH soon realized that a busted water line wasn't to blame this time. It was this: 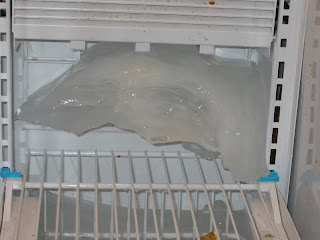 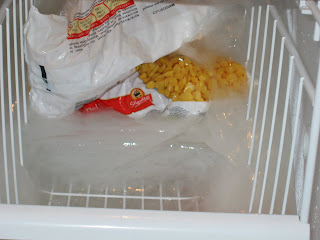 How did we get to this sorry state of affairs, you might ask? How could our freezer possibly get so choked with ice that it finally began to melt around the edges in the furnace-like heat we've been having lately and ooze out all over the floor?

I must admit, I think it was my fault. If I were to be totally honest, I'd admit that it's definitely my fault.

I have a thing about stockpiling food. It's in my family's blood. Even as a little kid I remember Mom and Dad keeping one corner of the credenza in our teeny tiny apartment reserved for the "emergency food." This mainly consisted of a bag of uncooked rice and several cans of potted meat, the kind with the devil holding a pitchfork on the paper wrapper. I think my mom used to rotate the food every once in awhile, swapping out the old bag of rice for a new one and using up the former "emergency bag" over the course of several dinners. Dad was the only one who ate the potted meat. I don't know what kind of emergency they thought they were planning for, but apparently boiled rice and meat spread were going to see us through it.

In light of that, it makes perfect sense that I keep lots of food on hand. (OK, maybe it doesn't exactly make sense, unless by "makes sense" you mean "still sounds crazy"). When DH and I moved into our house and bought the Icy the Fridge, I originally picked it out because it looked like the biggest one they had. Before we signed on the dotted line, though, I asked the salesman if they had an even bigger one.

"Ma'am," he said, clearly trying to be polite to the crazy woman, "this fridge holds enough food for nine people. Exactly how many people are living in your house?"

"Just the two of us," I replied calmly. We then bought the fridge...and the largest chest freezer the store had in stock. Never let it be said that I would run out of food in my lifetime...or anyone else's.

Eight years later, Icy and the chest freezer have been joined by a second fridge in the garage (given to us by DH's brother when he bought a new one) and a pantry full of food. Not to mention the kitchen cabinets, also full of food. None of which would be bad, except....

Well, let's just say I'm not nearly as good as Mom at rotating the food around. Our freezers in particular tend to resemble archaeological digs, with the oldest stuff at the bottom or the back and the newer stuff piled on top or in front. If I were a good rotator, I would probably have paid more attention last year when I noticed that I could no longer pull out the bottom freezer drawer in the kitchen fridge. I might have said to myself, "Self, it's time to pull the bags of corn up front and use them. But, what's this? They're frozen solid to the back of the fridge? Hmmm...maybe, Self, you should look into this."

Instead, when I noticed that I could no longer pull the bottom drawer out of the freezer, I simply let it alone and placed the newer food in front of whatever was in the back (see "frozen corn," above). Maybe I heard a few crickets chirping quietly in the back of my mind. All I know is when I mentioned to DH as he sopped up the mess in front of the fridge that maybe, just maybe I'd noticed the bottom drawer had been a tad encased in ice for, oh, the past year or so, he simply stopped and stared at me incredulously. I think it was all he could do not to ask how I could have been so incredibly stupid. I sort of wonder myself. How have I not managed to seriously hurt myself these past four decades?

So, that was our day: chipping great hunks of ice out of the freezer, melting ice sheets with the hair dryer, using up copious amounts of towels (at least they were cloth -- no trees were killed as a result of my stupidity) and occasionally resorting to the wet/dry vac to get rid of the watery evidence of my extreme lack of good judgment and sense. I did at least manage to give the freezer a good deep-cleaning, washing all the shelves to within an inch of their lives, scrubbing the inside of the door handle, throwing out the frozen squash puree from three or four summers ago when the garden produced way more pattypans than one family should have to deal with.

The freezer has now been deep-cleaned. Funny, though, I just don't feel the zen of it.
Posted by Splindarella at 10:59 PM

what an ordeal! i'm glad it wasn't anything more serious with the fridge, even though it's a major pain to clean out all that ice.

I stockpile food, too. I think it's because when Alex was a baby and I was in nursing school, we had NO MONEY. I literally had to count pennies to make sure we had enough to eat, and there was never anything leftover. We never had much choice in our meals, because I could only afford a little at a time. When I graduated, I swore I would never have to live like that again. So I started hoarding food. We could feed an army if we needed to. Hoarding food isn't that crazy... Or I'm just as crazy as you are so I don't notice. :D