Well, my vacation is nearly over. It's amazing how fast three weeks just speeds by. Monday I go back to work -- to intake testing, actually -- and then it's just two more weeks before the new semester starts, another week more before I begin teaching, and then...well, then it's just five or six weeks till Baby Zoe makes her appearance. Yikes! That's fast!

I haven't yet gotten things ready for Little Z's arrival. Baby M's outgrown clothing still sits in ziplock baggies and disorganized piles in her closet, which itself needs a good cleaning out an reorganizing. Not to mention that I have to figure out how to make space in her dresser for her little sister's stuff even as her own stuff is getting more and more voluminous. At least we have a couple of contractors coming over in the next two weeks to give us estimates on dividing the large, little-used upstairs space into two bedrooms and a bath for the kids.

And at least I've been knitting! I finished Zoe's blanket a few days ago, right down to the duplicate stitching of her name (and thanks to those who provided me with the name of the technique -- it was driving me crazy trying to think of it). 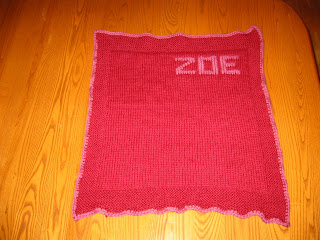 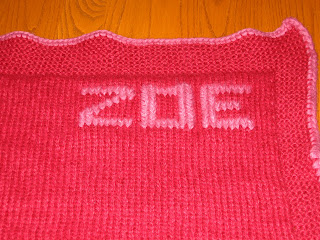 At first I thought I'd duplicate stitch a giant "Z" right in the center of the blanket but on further thought decided that might look a little too Zorro-ish for my taste. I like how her name turned out, but I was incredibly disappointed to find that a) the lovely soft alpaca that I was knitting with had some splits and joins in the skein -- I know I was working with Knitpicks yarn, which is decidedly budget-priced, but c'mon, folks, let's try to keep the skeins in one piece, shall we? and b) the joins sucked, to the point that as I was duplicate stitching Zoe's name, one join completely disintegrated and I lost several stitches of my basic knit fabric before catching the break and halting the damage. Aargh! Now, this wasn't like dropping a stitch and picking it back up -- the yarn itself had broken right in the middle of a stitch, right where I had been working with my tapestry needle, so of course both yarn ends took off in different directions, pulling out of their stitches and running (downward farther than upward) without leaving a clear indication of where they came from and how they should go back together. Not to mention that I had to join the freakin' ends somehow, so even if I could have figured out how to pick up the stitches seamlessly, I wouldn't have had enough yarn left after tying the ends together to do so.

I solved the problem by cursing loudly (didn't solve much, but sure made me feel better) then tying the errant ends together tightly and duplicate stitching over them. It's not a perfect fix, but no one but me will ever notice.

I've also started an MDK baby kimono in Swish Superwash, a deep heathered purple colorway. It's knitting up really nicely -- far nicer than the dishcloth cotton I've used with this pattern in the past. Once I have two or three of the kimonos in a couple of colors all knitted up, I think I'll be done with knitting for baby for the time being and may move on to doing something fancy, like a pretty lace shawl for myself. Just the thing to beat the postpartum blues.... :)
Posted by Splindarella at 7:54 AM

the blanket looks great! too bad you had problems with the yarn... sounds like it was a major pain to fix. i hope things are going well for you!