OK, I need some help here. I just received 4 spindles as part of an assortment of fiber, equipment and books I bought through the Spinners' and Weavers' Housecleaning Pages. One is a Louet top whorl, but the other three are mysteries to me. The woman I bought the spindles from couldn't remember any details about where they came from, so I'm wondering if anyone recognizes these: 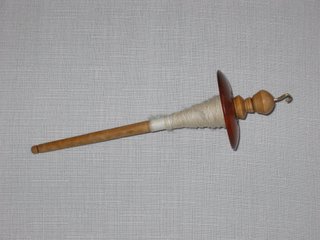 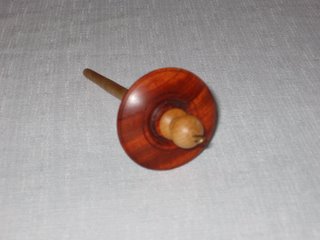 Mystery Spindle #1 looks to me like it might be a Hatchtown Farms spindle, but since I've only seen them in photos online and never in person I can't be sure. It's about 7 inches long from hook to end of shaft and fairly lightweight. The whorl isn't notched. 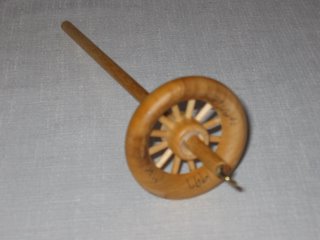 Mystery Spindle #2 looks to me like it has the whorl of a Simple Market Farms spindle. However, the shaft is clearly a roughly-cut dowel with a cheap cup hook screwed in off-center on one end, and the whorl is clumsily glued onto it. The fascinating thing about this spindle is that it's signed and dated. It says:
"Kick n' Spin"
1997
And there's a signature on the whorl also that I can't read but that seems to be two words, the first beginning with S and ending with R (maybe only 3 or so letters long) and the second really more of a signature scribble than having any well-defined letters. There is also a hand drawing of a sheep (done in the same black ink as the rest of the writing) on the outer edge of the whorl. Unfortunately, my camera wouldn't take any clear photos of the writing. If this were just a homemade toy car wheel spindle, I can't imagine why someone would name, date and autograph it. Does anyone have any ideas about this? 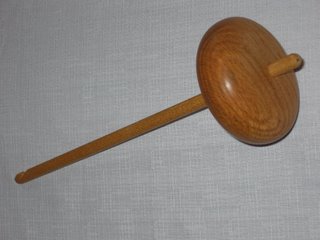 Mystery Spindle #3 is a real boat anchor, but I love the way it spins forever on a single twirl. I think this will turn out to be a wonderful plying spindle. It's a bottom whorl, about 10 inches long, and weighs about 3.5 ounces. There's no hook, but it does have an interesting "double notch" (for lack of a better word). The end is shaped like a shallowly-cut crochet hook, and the center of the hooked end is deeply cut. It looks like the hook is there for a half-hitch to wrap around and the notch is there for the end of the thread to fit into. Sound familiar to anyone?

I'd love to hear any ideas about what these three spindles may be. I got the deal of the century on them (all three plus the Louet for $10!), so I certainly can't complain no matter what the provenance. Still, I'd be interested to know more about these if anyone can enlighten me.
Posted by Splindarella at 12:36 PM

Dollars to donuts #2 was made in some sort of "make and decorate your own spindle" class. I made an almost identical one recently:

The whorls are just toy wheels.

I've been drooling over their spindles for months now. They are always sold out by the time I check their site. They say that you can email them to receive a notice, but I never get the emails. Very lovely spindle.