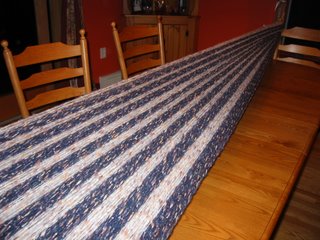 This is a shot of my current warp, which I put on while watching some of the second season of Lost on DVD last night. This is the widest warp I've ever used; it fills my rigid heddle loom from side to side for a total of 32 inches. I'm using a wonderfully nubbly, textured novelty yarn that I picked up for a buck a skein at the local dollar store. I bought a whole giant tubfull of the stuff with the vague idea of knitting some shawls on large needles, but I like the idea of a soft, puffy afghan much better (not to mention that weaving will go much faster than knitting and will be far easier on my hands).

Tonight's goal: get all those warp ends threaded through the heddle "eyes" while I watch yet more Lost.

I've said it before, but it bears repeating: Weaving takes a whole heckuva lot more patience than mere knitting does. With knitting, I can pick up my needles and some yarn and boldly cast on; in as fast as that, I'm knitting. With weaving, however, the first flush of excitement of starting a new project wanes as the lengthy and time-consuming set-up process known as warping the loom takes place. It will take me at least two more nights of set-up work, maybe more, before I can actually begin weaving. If that doesn't teach patience, nothing will.

In other news, I'm almost finished with my current travel-knitting project: Beethoven's Variations on a D ickey (huh-huh...she said "dickey" -- right, Terri? *g*), and I'm practically bursting with the need to wear it AS SOON AS IT COMES OFF THE NEEDLES. It'll make for an interesting scene on the subway, I'm sure. Stay tuned for more details....
Posted by Splindarella at 9:34 PM

is that yarn pebbles? i have a skein and have absolutely NO idea what to do with it... is it itchy once it's knit up?

You pegged it, Ren. There's not much in a single skein of Pebbles -- 80- or 90-something yards, I think -- so I'm not quite sure you could make much of anything with it alone. Maybe you could use it together with another yarn and make a striped something-or-other. I haven't finished weaving with it yet so I can't vouch for the itch factor, but from all the "petting" I've done with it on the loom it seems soft enough to at least wear as a scarf.

hahaha, i've been having lots of fun with knitting multiple skeins of various yarns with my new size 35 straights. it goes really quickly and, if it's too short, then it's a neckwarmer or something. i may have to find a complimentary yarn to go with it and do that. or it can sit in my stash for a while longer! ^^