At least, he will once DH gets finished programming him.

Yes, that's right, I caved to the Elmo-fest that is toddler pop-culture. When I was a kid (insert cantankerous voiceover here), Valentine's Day meant chocolates. Every year, I got a box for Mom and Dad, they got a box for me, and Dad got a box for Mom. And a card.
But ever since the way-back-when Valentine's Day when I burst into tears at DH's (then Dear Boyfriend) gift of chocolate truffles in a crystal box -- given just as I was terribly depressed about and obsessing over how I'd gained weight -- he's sort of steered clear of chocolates as a gift. And since he doesn't really eat chocolates much himself...well, any box I bought for him would be a de facto box for me. Baby M, who would love nothing more than a whole box of chocolates for herself, is at 22 months still far too young to be given one.

And so...DH is getting something decidedly not made of chocolate, the details of which I won't post on the off chance that he may read this before I manage to give him is present (more on that in a sec). I'm not getting something made of chocolate, either (though I've long given up crying over gifted chocolate truffles...in fact, if there's anyone reading this who happens to be crying over gifted truffles at the moment and wants someone to take the nasty things off your hands, consider me your woman). And after a short discussion about what non-chocolate delight might please Baby M, DH and I settled on an Elmo doll. (The girl excitedly shrieks, "Elmo PJs!!" at bedtime...you think she'll go crazy over a doll? Yeah. Maybe just a bit.)

So yesterday, before the godawful sleet started to fall, I hightailed myself to midtown and checked out the Elmo offerings at Toys R Us. (If, by the way, you've never seen the midtown Toys R Us, you Really. Must. Go. There's a freakin' ferris wheel inside, fergawdsake.)
Did they have Elmos! They had Chicken Dance Elmo, Hokey-Pokey Elmo, Elmos that hummed and sucked their thumbs and did everything except jump right up and high-five a child. And each and every one of them felt like hugging a sock full of batteries. Yuck!
Then I saw this Elmo: 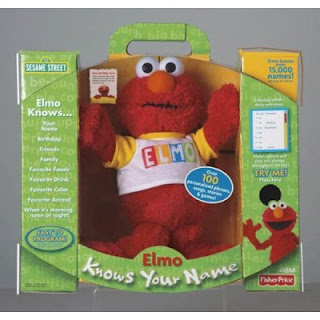 Not only does he do super-cool things like say your child's name (and, it seems, about a hundred other things that you can personalize, like your child's birthday, friends' names, and more), he's nice and soft and plush and not at all like a Terminator skeleton under a saggy muppet skin. I tend to object to toys that "do too much" on the theory that they leave less room for the imagination (I'm a huge fan of wooden blocks and giant empty cardboard boxes and the like), but even I have to admit, this looks pretty freakin' sweet. You can even program the little bugger right in the box, so your darling child can unwrap his or her present and have start talking right off the bat. Is that not the coolest thing? (OK, it also smacks disturbingly of Chucky, but I'm willing to let that go.) Now, all DH has to do is program the darn thing. Which means all we have to do is manage to get home tonight.

Because...it's freakin' sleeting here, people! What is this? We've been having the warmest winter on record and global warming be damned, I've really been enjoying it. Now all of a sudden, we're expected to cope with actual winter? Snow? Sleet? Surely, you jest. We didn't even go home last night. For the second time in just about as many weeks, the whole clan stayed with DH's parents, this time so we wouldn't have to drive on the skating rink that has become our highway system.


On a side note, DH and I did make a foray to Macy's last night in search of work clothes to wear today. When we saw the humongous crowds, we asked, in all innocence, "Why are there so many people here on a Tuesday night?" The salesperson looked at us like we had three heads apiece and said, "It's the night before Valentime's Day." (Is this a particularly New York thing, to say Valentime's Day instead of Valentine's Day?) DH and I laughed and I said, "Oh, we're such an old married couple, we didn't even realize." To which the salesclerk replied, smiling, "Well, I guess if you've been doin' it all year 'round, you don't need to be doin' it on Valentime's Day."

And if the weather doesn't let us make it home for the second night in a row, he'll have been not only clever, but absolutely, positively correct.
Posted by Splindarella at 2:31 PM

when i was the sesame street crazy age, no one cared about elmo. no one made elmo dolls and toys. my mom had to handmake me a stuffed toy elmo because she couldn't find any in stores. boy how things have changed! i hope baby m loves her gift!

and i hope the weather clears up enough for you to make it home, too!