Today, DH and I stayed home from work. What was supposed to be a "light dusting" of snow came down hard enough in the middle of the night to blanket roads and close schools by morning, and we just didn't want to risk the hour's drive down to my in-laws' house to drop off Baby M. And so, DH worked from home and I cancelled my class (which I'll have to make up later in the semester) and we all stayed safely home for the day.

The upside is, I got a fair amount of stuff done. I wrote up a paper that's due this Saturday (and which I couldn't quite figure out when I'd have the time to do) and even emailed it to my professor for feedback. I took care of a bunch of work stuff (most of which came as a result of my not being able to make it in to work today, so I'm not necessarily ahead of the game on that one, but oh well). And...

DH and I got to make a snowman with Baby M.

Not any old snowman, mind you. Baby M's first snowman. Ever.

How cool is that? 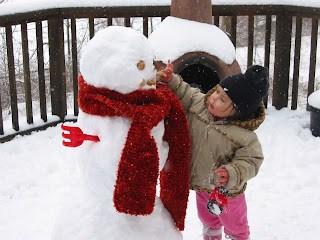 It looks like Baby M is helpfully adding an almond into Mr. Snowman's crooked grin. In reality, she's swiping almonds for her own nefarious purposes. She gets that from her father.

I must say, however, I think it was much cooler for DH and me than for her. She absolutely loves snowmen, and whenever she sees me sitting at the computer, she toddles over and demands, "Snowman picture!" Whereby I google for the jillionth time some low-budget government-sponsored website that has a line drawing of a snowman with a small assortment of items that can be dragged and dropped onto his body. The clincher: he can have arms made of candy canes. That gets Baby M's attention every time.

Sadly, we had no giant candy canes for our snowman's arms. But we did have walnuts for eyes, a Brazil nut for a nose, and a small handful of almonds for a mouth. Baby M's plastic sand rake served as an arm (she refused to part with her plastic shovel to give the snowman a matching appendage), and the very first scarf I ever knit still sits wrapped around our snowman's neck.

I don't think I'd built a snowman since college (and I'm not sure if I'd ever built one before that), so I had a great time. And Baby M was so pooped afterwards that after taking a nice, hot bath to warm her up, she fell sound asleep in my arms and I got to make a nice, big pot of homemade soup for dinner. Now I'm just waiting for DH to sign off from work and for Baby M to wake up from her nap so we can all think about having dinner.

God, I love snow days.
Posted by Splindarella at 4:36 PM

oooh, sounds like fun! i've never actually seen snow (well, once when i was very small) let alone made a snowman! looks like baby M enjoyed herself, too! : )

Wow, that sounds like a near perfect day! Baby M is so cute!