Found another moth today, this time in the guest bathroom. At least DH managed to squish the thing. He swears it wasn't a clothes moth; I swear he's just trying to make me feel better.

So, just in case, I've decided to take things to the next level: 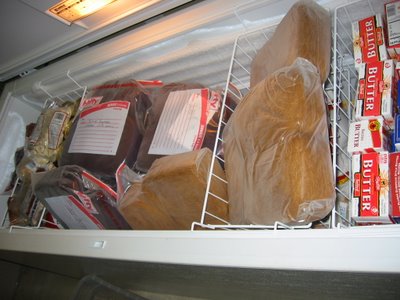 Nestled comfortably between the butter and the frozen blueberries is one plastic storage tub's worth of wool. Freezing for 72 hours is supposed to kill moth larvae, and that's exactly what I intend to do. And people said I was crazy to buy a giant chest freezer for just my husband and me!

In other news, poor M is sick. She woke us up at nearly 5am, covered in her own vomit. She'd eaten craisins and blueberries yesterday among other things, so it was quite the shocking sight. No work for me today -- it'll be the doctor's office instead. M is certainly looking better now than she did four hours ago -- she's eaten a few Cheerios and is happily tossing the remainder to the dogs as I write -- but she's been a bit "off" since Sunday (low-grade fever, diarrhea), so I want to get her checked out. Don't know how much, if any, knitting I'll be able to get done in the waiting room, but I'll bring my m-i-l's yak/merino scarf with me just in case.
Posted by Splindarella at 8:36 AM