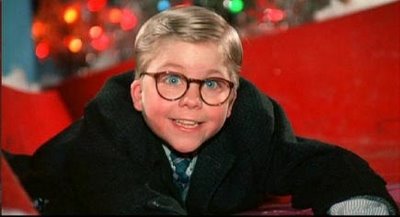 God, I love this movie. How many great lines are there?

Next on deck for the Christmas movie-thon: How the Grinch Stole Christmas.

HOLIDAY KNITTING UPDATE:
And in a "fighting with mom" update...after a long phone conversation during which I (surprisingly) remained un-hostile while my mother accused me of being oversensitive, jealous and having my "brains twisted," following which she hung up on me (ah, the holidays...), she then phoned the next day, offered a very sincere apology, promised to change her behavior and asked if we could put the past behind us and start over in the new year. I'm still reeling just a bit from the turn of events, but overall I'm (tentatively) happy with how things seem to have turned out. Could I be even more noncommittal? I guess that's the part of me that's still somewhat shellshocked talking; still, I hope things really will work out. Life's too short, ya know?
Posted by Splindarella at 1:44 AM