There are disparate theories as to the origins of the term. The more common stories include:

While I won't be catching any wrens in boxes or distributing parcels to serfs, I will use a bit of my Boxing Day to write about our Christmas.

Keep in mind, this was only Baby M's second Christmas. Last year at not even 9 months old, Baby M was a pretty passive participant in the holiday festivities. She had presents (which we opened) and took lots of photos 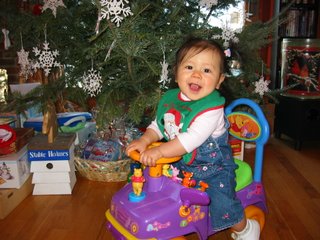 ...but for the most part, Christmas was just another day to her.

This year, however, Baby M quickly grasped the idea of Santa Claus (after our somewhat rocky photo-op visit, that is) and presents and just how tasty candy canes can be (especially when you're cute and everyone who has candy canes wants to give them to you), and well...the rest, as they say, is herstory.

I must admit, in my completely unbiased opinion, Baby M is a very sweet girl. Still too innocent to be caught up in how much stuff was waiting for her under the tree, she opened her presents slowly and over a period of days: some on Christmas Eve at my in-laws' house; others on Christmas day at our house, then my mom's house, and finally my aunt's house; and even a few stragglers today at home. She still has a stocking to look through, too. I decided that I didn't want to rush her. It made me indescribably happy to see her open a present and get so caught up in playing with it that she forgot everything else, including the rest of the presents waiting for her. See? Such a sweetie!

So, Santa was good to Baby M and brought her an old-school red metal tricycle (which she can't quite pedal yet but which she loves to sit on while ringing the bell), a Playskool Little People farm (kind of like a doll house but instead of a house it's a barn with all the farm animals plus a couple of human "farmers" -- one of them a little Chinese girl, which is partly why I wanted this toy for her to begin with), a little electronic keyboard shaped like an alligator, a bunch of Mickey and Minnie Mouse dolls (knowing how she likes them, her godparents, grandparents and parents all wound up buying them for her) and a stack of books a foot high. So far, her favorite of all seems to be the three-dollar plastic Slinky from Toys R Us. Not that I'm complaining, mind you; I'd rather have her fling a Slinky around than sit slack-jawed in front of a television or a video game any day. And best of all, she got to have fun with her cousins on Christmas Day. Since they are teenagers and all gaga over their cute little cuz, they spent the day indulging her in games of hide-and-seek, slide-down-the-stairs and let's-eat-all-the-pretzels-in-the-bowl-before-mommy-can-stop-you. All in all, I think she had a good Christmas.

DH and I had a good Christmas as well. I surprised him with a telescope (something he's wanted for years) and he was so excited that he dropped everything and set it up as soon as he unwrapped it. Like father like daughter! I also gave him some seed money for his smithy and a subscription to Blacksmith's Journal. Hey, he supports me in my fiber "habit," so turn about is fair play. And he loved the knitted balaclava. He calls it his "ninja mask" and experimented with different ways of wearing it all yesterday.

DH was very generous to me, as always. He gave me some fibery stuff that I'd asked for (a set of the new Knitpicks Options knitting needles; the KIPer knitting bag set, which I love love LOVE and heartily recommend; a lace blocking kit) and the really big gift: an 80 gig iPod. Now I can listen to audiobooks while I knit -- woo-hoo!!!

Mom gave me some beautiful handmade things: a crocheted angel tree-topper, a hand-embroidered tablecloth (a true labor of love since her arthritis has left her nearly unable to use a needle and thread), a crocheted tree ornament. Things between us are still somewhat "stiff," but I think that with some more time things should (hopefully) get back to normal.

And now I'm just finishing up Baby M's Toddle scarf and dreaming of all the other things I want to knit over my vacation...when I'm not busy painting our bedroom and master bath alongside DH, that is. Next year I think I'm going to ask Santa for some hired help for Christmas. Where are all the good serfs when you need them???

Posted by Splindarella at 12:35 AM

I have had my options for about two weeks now and I love them. They are what I reach for first when I start a project. I am waiting for them to come out with 16 inch cables. I heard somewhere that they were going to. Happy Knitting, painting and New Year!

I'm replying here to a comment you sent me regarding the Sheep Shed fibers. Thank you so much for the information. I'm very happy with the black and white and brown and white roving from my last order. I'm thinking that once I've spun up a sufficient amount to satisfy my dh's concern that we will be overrun by wool and can unload some of my spun stuff on my mother or into projects I've knitted... than I'm going to order one of her BIG bags of roving.

Wow, sounds like you had a fabulous holiday! Baby M is a doll!