So, today DH and I took Baby M for her first sit-down with Santa Claus. It happened by accident, actually; DH went to his aikido class in the morning and Baby M and I went along for the ride. She and I headed over to the bookstore in the mall while DH was in class, and that's where we saw Santa. (Don't get me started on how I think it's criminal the way we've pushed Christmas prep all the way to back before Halloween. I was just grateful that the line was short.) Anyway, once DH's class was over, he joined us over at the mall and we lined up to wait for Santa.

As it happened, Santa was just finishing up his lunch break when we got on line (hey, everybody's gotta eat, even jolly ol' St. Nick -- keeping track of every kid in the world is hungry work). As he walked back to his throne, accompanied by a chorus of ooohs and aaahs from the assembled children, he paused to give a high-five here and a handshake there, and at one point he stopped and spoke with one mother for a good couple of minutes. Now, let me just say, this was no college-kid Santa with a fake beard and a pillow under his Santa suit. This Santa was the real deal: a genuine white beard and long-ish white hair that he had clearly curled into ringlets himself, and a belly that left hardly a kid's worth of space on his lap when he sat. The man obviously had been doing this for years and relished his role as the Spirit of Christmas. He spoke with a slight Southern twang and seemed just as happy being there with the kids as they were being with him.

And it was during Santa's chat with the mom three or four spots down the line that the man behind me said, only half under his breath, "OK, Santa, what's the holdup? Let's get it moving here." Merry Christmas, indeed.

Who, you might ask, mouths off to Santa? Sadly, it seems that well-off yuppies who are clearly used to getting everything they want in their stockings is the answer. Though I do wonder, if the punishment for being naughty is a lump of coal in the stocking, what exactly happens if you really piss off the big guy? Does Santa leave you a jack-in-the-box rigged to pop out and slap you in the snoot?

No matter. Except for Scrooge McJerk we all waited our turns with, if not a brimming cupful of holiday cheer, then at least with a modicum of restraint and patience. And it's here that I'd like to publically thank little 5-year-old Juliana, one spot ahead of us on line, who decided to entertain Baby M during the wait. Juliana had a balloon -- a pink balloon -- and with a goodwill that some of the adults nearby could have learned from, she gladly shared it with Baby M. They took turns holding the balloon, tossing it to the ground (the good folks at Nordstrom's, in their wisdom, had attached a plastic weight to the end of the string to prevent an accidental fly-away), holding hands, chasing one another around...it was charming, really. And providential. I cannot imagine the lengths I would have had to go to in order to keep Baby M occupied otherwise. So thank you, Juliana. You have truly helped to make my season bright.

Of course, that just left the minor detail of actually seeing Santa up close and personal-like. Baby M was fine when Santa walked by waving and high-fiving every kid in arm's reach. She was even okay when we walked up to Santa's throne and looked the kindly old elf in the eye. But as soon as I perched her on his knee, she said in a slightly panicked little voice, "Mommy?"

And all holiday heck broke loose.

Kudos to Santa for not jettisoning us both with a swift kick of his boot-clad elfin foot. I told you the man was a pro, clearly as adept at dealing with frantic kids as with frazzled parents. And much as I didn't believe I was either frantic or frazzled at the time, looking back on it I can now see I was a teeny bit -- or more -- of both. (Ohmygod, we're holding up the line. Holding up the line! Is Yuppie Dad back there right now muttering, "Get the lead out"? How long will it take before aggrieved parents started pelting us with fake snowballs and tinsel?)

I picture good ol' Santa in his life the other 11 months of the year. I see him as a 911 dispatcher, calmly explaining to a panic-stricken caller how to tie a tourniquet or correctly pack up a severed finger so it can be reattached later. And the caller would listen and obey, because you just don't backtalk Santa.

"Now listen to me, Mom." Not unkind; firm but gentle, and with that charming twanginess. Maybe Santa's from the South Pole instead of the North...?

"You're going to put this knee up here. Put her right out on the end of your knee and turn sideways. I won't even touch her; I'll just be back here and you'll be out of the way for the photo."

This would have been a brilliant plan had I had a spatula to scrape Baby M off my neck, where she was clinging like a kudzu vine. Several tries (and worried thoughts about Yuppie Dad and his under-the-breath muttering) later and I finally said, "Just take the photo with me in it."

Santa had a plan for that, too. Of course, at this point I was far too frazzled to follow him clearly. I am a college professor -- I teach English, for chrissake -- yet it took me three tries before I figured out what he meant when he said, "I want you to hold her with her back to your front." Not my finest moment, I'll admit.

So we now are the proud possessors of 1 5x7 and 4 wallet-sized photos of me smiling apologetically as I perch gingerly on Santa's lap, an utterly miserable-looking Baby M in my arms. Ah, yes. It's beginning to look a lot like Christmas.

And now, as promised, I give you The Meathead: 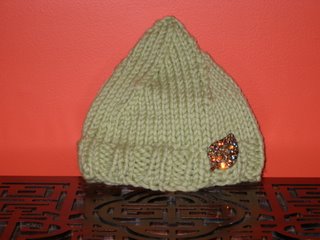 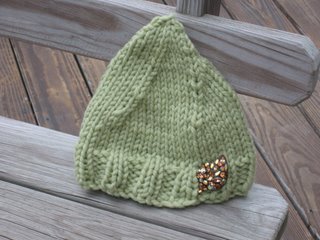 Posted by Splindarella at 9:17 PM

the meathead is so cute! i really like it!

we have plenty of pictures of me not liking santa (also known as sobbing hysterically)! i'm not sure why he seemed so threatening...

I really feel for you! I have always wondered why we put ourselves (and our chidren) through all the trauma just to get those Santa pictures. I will say now that my boys are older I am gad we did it and they do not seem to be permanently scarred.
Your meathead turned out nice. The embellishment is perfect!