Burnin' Down the House

So, ever since DH and I have lived here -- over seven years now, and where the hell did all that time go, I ask you -- there have been three abandoned hunting cabins on the 100+ acre track of woods across the road from us. Maybe two-three years ago, one of the cabins collapsed from sheer age and decrepitude. Another developed a gaping maw of a hold in its side, possibly from having an ATV run smack through it. And the third...well, this is what the third one looked like at about 7 o'clock this evening. 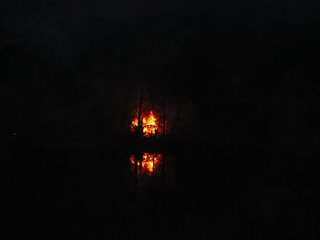 Here's how the conversation between DH and me went.

DH: I think there's a fire across the road.
Me: Call 911.
DH: I don't know, maybe it's just someone shooting off fireworks.
Me: Someone's shooting off flaming fireworks in the woods across the road from our house?? Call 911!
DH: Maybe someone just wanted to get warm and set a fire in the abandoned cabin....
Me: Call freakin' 911!

The trouble with living in the exurbs is that lots of services that are public and paid for by taxes in the cities -- little things like garbage collection and fire-puttin'-out-tion -- are either private services (hence the monthly shakedown by our trash collectors) or run by volunteers. Hence the response time that had me packing up the baby and getting ready to evac just in case the increasingly worrisome conflagration jumped the road and we had to hightail it to safety.

Let it not be said that when they did arrive, our local firefighters didn't do it right. They must have sent out every engine they had within three towns of us...doubly impressive since these men and women were in all likelihood paged away from a Saturday spent comfortably at home to rush to protect the lives and property of people they don't even know. Seriously, folks, that takes both altruism and bravery to an entirely different level.

So, DH, Baby M and I sat out in the damn-I-can't-believe-winter's-almost-here freezing cold watching the flaming cabin send a plume of sparks and black smoke into the air across the road, and then we retired into the house (amazing how half an hour in the cold outdoors will make you truly appreciate central heating) to eat DH's birthday dinner of BBQ'd steaks (in DH's world, it's never too cold to BBQ) with Junior's carrot-cheesecake for dessert.

Side note: If you've never tried Junior's Cheesecake, run don't walk and get yourself some.

For anyone still reading this, I can only assume you either a) are already a fan of Junior's Cheesecake and have a nice, big slice in the fridge ready for eatin' later on, or b) are unable to understand the English language sufficiently. Maybe for you Group B people, if I type it bigger, it'll work.... GO GET SOME JUNIOR'S CHEESECAKE. OK?

Group A folks, let me just tell you, it was a strange mix of emotions watching that little cabin across the road burn down to the ground. On the one hand, I'm relieved; after all, who wants an abandoned building nearby? Abandoned buildings attract all kinds of weirdness and I'm glad not to have that one around any more. On the other hand, that cabin was kinda cute in a falling-down, backwoods, Deliverance-esque kind of way. It was a link to a time when this area wasn't full of brand-new kit houses (like ours) and ex-city-folk (like us); a time when the farm houses really contained farm families, probably ones that built those very same houses with their very own hands. I'm going to miss looking across the road and seeing the greying wood front porch facing out onto the water. It's hard to tell in the dark, but all that seems to be left standing is the stone chimney.

And so passes another tiny piece of history.
Posted by Splindarella at 9:14 PM

i'm glad the volunteer firefighters were able to get that fire out before it threatened you and your family! (and happy birthday to your DH ^^)

i made my bunny tails by knitting a bit of i-cord (mine was an inch or two long, but mostly i just relied on how it looked held up against the bunny) and then stitched it into a loop and attached to the bunny. it's really pretty quick and easy, and i think it's a lot nicer than the bit of fluff they say to use in the pattern (i think the i-cord may have been listed as a modification at the bottom of the pattern? i don't remember now). as for seaming, i don't usually mind doing the actual bunny, but by the time i get to the ears... it's a battle to finish!

ooooh... alpaca! do you think it would shed a lot? there's an acrylic/alpaca blend (patons rumor) at michael's that looked kind of nice, but i heard it sheds a lot, especially on dark colors. oh, and how is the stitch definition? it is pretty fuzzy? mm, but alpaca sounds so nice and warm! : ) thanks for the idea!