No, that's not an All in the Family reference...it's the Meathead Hat Pattern from the KAL over at Stitch Marker. I'm really excited! First, because I've had a ball of Rowan Big Wool for months now -- purchased at 50% off at Gotta Knit! when the summer yarns had come in and they were trying to make some room -- and I've envisioned it as a hat but never known quite which pattern to use...until now. But the real fun of this pattern is the embellishment. I have an idea of what I want to do, but I'm not saying until it's finished. The pattern looks like a super-quick knit, and I have high hopes of doing it all tonight while watching a movie that does not (please, God) suck.

In other knitting news, FIL's first glitten is a finger away from being finished; if the Meathead goes as super-quick as I suspect it will, I might just finish off that glitten tonight, too, and then cast on for the next one, just to keep the dreaded SMS at bay. I finished off another felted bowl (knitted but not yet felted) this afternoon, thereby freeing up my size 15 circs for the Meathead...not like I don't have another pair or three of size 15s or anything, but I decided that no matter how quick a knit this hat is, in order for me to cast on another project, I had to first cast one off.

And in other, other news...I am totally unmotivated to do anything except knit and play with Baby M. Too bad there's another 3 weeks of school left before the end of the semester. Really too bad I also have a 12-15 page paper due on December 9 for the class I'm taking. If I weren't so far along already into this second master's, I'd chuck the whole thing, maybe do an MFA in fiber arts instead (at least I'd enjoy that).

Will close with the sentiment I feel most strongly right about now: 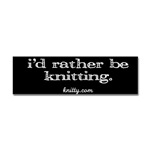 Posted by Splindarella at 4:34 PM