Afterthought Thrums and a Trio of Hats 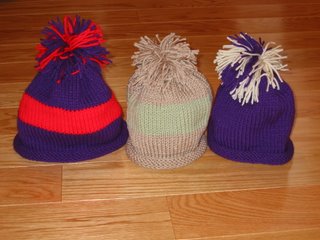 I actually finishedg these off several days ago; three more hats for Soaring Eagles. I haven't worked on any Soaring Eagles hats since I finished these off, although I do have one hat body all knitted up and just waiting to be cast off the machine and sewn up.

Instead, I've been working on this: 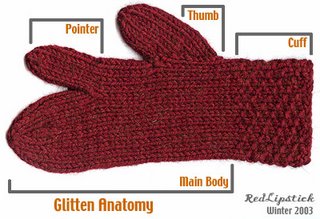 Here is where, if I were totally cool and with-it and together, I would have a photo of FIL's first finished glitten to show off. Instead, I have the lovely glitten, above, which is utterly not of my construction. Still, it gives the basic idea of what a glitten is. Now picture it in black with a plain 2x2 ribbing and nice and chunky from all the fluffy afterthought thrums filling the insides.

What is an afterthought thrum? Ah, I thought you'd never ask.

A thrum is a piece of fleece that's knitted into a mitten on the inside. Line a mitten with thrums and you get a super-thick, super-warm mitten; it's kind of like putting your hand in a muff instead of just a mitten. The only thrums I've seen are ones that get knitted into an article as you go along. You need to know in advance that you're going to thrum something in order to do it.

However...well, let's just say I had a little problem with gauge on FIL's glittens. The first one I made was a touch on the small side. Yes, I swatched. And yes, I got gauge using the size 3s and 5s recommended in the pattern. And when I actually knitted up the glitten, I found I'd tightened up by nearly 3 stitches over 2 inches. Doesn't sound like a lot, but it did do enough that when I had DH try the glitten on for a test-fit (figuring that even though FIL is on the slight side, DH's hands were a closer approximation than mine would be), the first word out of his mouth was, "Hmmm...small."

I hemmed. I hawed. And I decided to put the small glitten aside and go up two needle sizes to knit another one.

I used the size 5s that I'd used for the first glitten body as the cuff needle; I then went to get my size 7s to knit the body. And that's when I pulled out a size 8 and decided I was too lazy to paw through the tangle of circs to find the 7. "What the heck, I thought, "one size up won't kill me."

And I was right. Using the 8s didn't come close to killing me. It did, however, give me a glitten that was significantly roomier than the previous one. So roomy, in fact, that DH's test fit produced the single comment, "Big."

Which is where the afterthought thrums come in. I figured I could fill some of the empty space in the glitten and make it even toastier and warmer than I'd intended by adding thrums. And when the only instructions I could find online showed how to knit in thrums, I did a little unventing.

I'm sure people have done this before. But since I couldn't find a record of it and since I figured it out myself whether or not other people have done this before, I feel okay about laying claim to the unvention of afterthought thrums. If necessity is the mother of invention, maybe laziness is the mother of unvention. There was just no freakin' way I was going to knit another damn glitten in a different size. Period.

Had I been well-prepared, I would have had black fiber all ready to make into thrums to line my pretty black glitten. As it was, the best I could come up with was a brownish-grey that looked decidedly more brown than grey when held against the jet-black glitten. I used a fine-gauge crochet hook to pull each thrum through two stitches on the inside of the glitten and tie it off in a hawk's head knot. It took a couple of hours, but I managed to line the entire inside of the glitten -- and boy oh boy, does it feel good. Of course, it wasn't until I'd lined the entire glitten that I realized that some of the thrums were visible on the outside of the glitten. Whoops. My glitten looks like it has the pox (those words exactly came out of DH's mouth when he looked at the thrummed glitten: "the pox"), but I don't care. I'm going to pull even more thrums through to the right side and call it a design feature.

Now I just need to knit up the mate and that's another Christmas present under the belt and ready to be put under the tree.
Posted by Splindarella at 10:43 PM

does that mean you have to use your "unvented" technique on the second glitten as well, to give them the same look?

But is it just me, or does that name sound DIRTY!!!?

I just love that counter you have in your sidebar. I just put one on my site. Thanks!