Yet another wonderful surprise arrived in the mail today from my SP9 Pal, and I'm simply overwhelmed at her kindness. (Note that I'm committing to a "her" here, finally, instead of my former "his/her" designation. It suddenly hit me that quite awhile back, before my second SP9 package arrived, my pal mentioned that her husband had a Godiva chocolate shop near his office. While I'm as open-minded as the next gal and fully realize that not only women have husbands these days, I've decided to go out on a limb and assume that my pal is a female. Of course, it only took me a month and a half to realize this. I blame Baby M. Placenta is made of brain cells, as a friend of mine likes to say, and my powers of cognition truly haven't been the same since giving birth.)

Anyway, take a look at what arrived: patterns for these two gorgeous afghans from Pat Ashforth and Steve Plummer over at Wooly Thoughts. 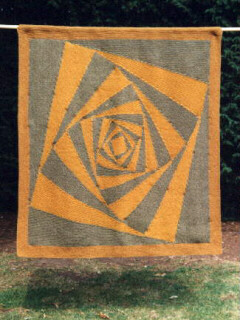 This first pattern is for Curve of Pursuit, an afghan/wall hanging that represents four dogs chasing each other's tails around a field. I first saw this afghan featured in Mason Dixon Knitting under their log cabin knitting section. I then saw a completed Curve of Pursuit over at Bente's Blog and decided I had to make one myself one day. 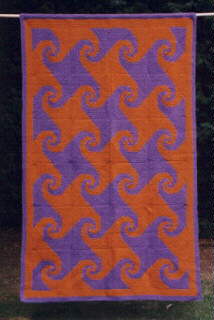 Of course, once I got over to Wooly Thoughts and got a look at all their other amazing afghan patterns (many, like the two above, based on mathematical principles -- how cool is that?), it was a safe bet that I'd find more to fall in love with. This pattern is called The Best of both Whirls, and while it looks for all the world to be a series of interlocking spirals along the lines of an Escher drawing, it's really formed by a series of triangles that build one upon the other. Brilliant.

I must admit, I'm still fairly stunned that my pal has been so wonderful to me. I've participated in a variety of swaps before and for the most part have had very good luck in the partners I've drawn, but never to this extent. My partner has been both generous and truly considerate; she even offered to spin up the fiber she sent me because she read about my injured finger and thought I might not be able to do it myself. I'm really looking forward to our reveal in January so I can thank her by name. For now, though, this will have to do: 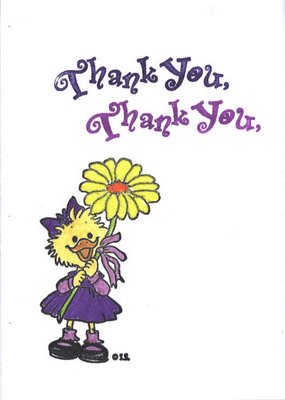 HOLIDAY KNITTING UPDATE:
And now I really need to go to sleep. Staying up till 3am thrumming mittens with company coming tomorrow probably isn't the smartest thing I've ever done, but at least the freakin' Christmas presents will be finished in time for Christmas.

And to all a good night!
Posted by Splindarella at 2:45 AM