It started with my yarn dyeing-in-a-crockpot experiment. I liked that so well I went right on to crockpot-dyeing some light grey mystery fiber. 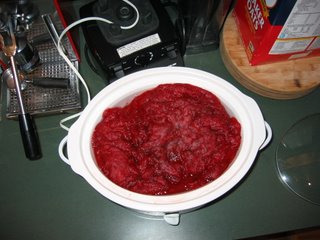 That nearly turned into a disaster as I let impatience take hold and instead of carefully unwinding the large roll of very thin roving I plopped it into the dyebath as-is...only to decide this was less than wise and then try to unwind it -- sopping wet and full of dye -- as it sat in said bath. I tried to photograph my hands but the incredible shade of Kool-Aid red simply would not show up in anywhere near all its glory on my camera. I managed to pull apart enough of the roving that everything got at least a touch of dye on it. 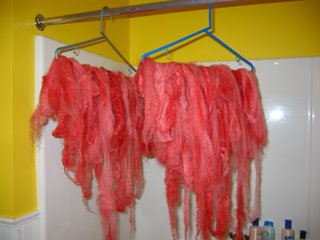 Tomorrow it's back to the supermarket to load up on other Kool-Aid colors to dye the other roll of grey mystery roving and then maybe blend them together. Of course, I now see the need for a drum carder. *sigh* And just when I thought I'd gotten every bit of fiber equipment I could possibly want. *wink*

Speaking of equipment...my BIG success has been finally getting my Country Craftsman spinning wheel up and running. Woo-hoo!! 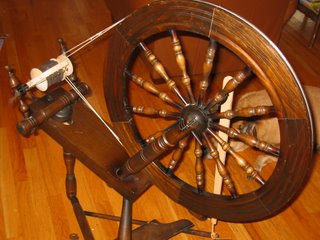 This is the wheel that my friend IV gave me...the wheel she refused to take any money for because she had had such bad luck with it and had cursed the woman who had sold it to her so very much as a result that she didn't want to risk bad karma by selling it to someone else. Once I promised not to curse her if I couldn't get it to work, it was all mine. I finally got myself in gear and bought the necessary replacement parts from the last known maker of the CC (naturally the wheel is out of production), only to find that even with the parts, the wheel would barely rotate. I thought it might need oil, but again didn't get myself in gear until L paid a visit and recommended that I soak the leathers in oil overnight. Well, bless my little 3-in-1 oilcan but it worked. I soaked those leathers and oiled every other moving part on that wheel and now it spins like a charm. It seems to want to spin up bulky yarn, which is rather ironic since the bobbins are miniscule compared with the bobbins on my Louet, a wheel that only seems to want to spin up fine yarns, but that's okay by me. 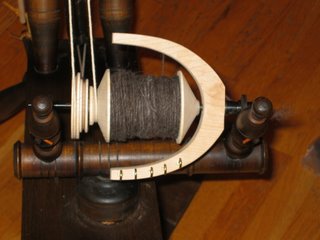 I had a great time today spinning up two bobbins full on the CC and then plying them into a bulky, thick-and-thin yarn on the Louet. Tomorrow I'll have to skein and soak it, then hang it to dry...and take photos, of course. I might even wind up knitting this up into DH's skullcap (finally).

L also turned my eye toward yet another new piece of fiber equipment: a charkha. This is an Indian-style spinning wheel specifically designed for spinning very short-staple-length fibers like cotton. Gandhi used a charkha (and even made it a requirement for all members of his cabinet to spend at least half an hour a day spinning). Well, L let me try out her Bosworth Book Charkha, and boy did I like it. I mean a lot. To the point where I might have to seriously consider getting one for myself. Yet another thing to add to the (*gulp* growing) list.

Last but certainly not least, I've been knitting. That plain-Jane garter stitch sure is addictive, especially on my fitted bog jacket. Much as I think to myself that I should be switching off every once in awhile to that Bubbly curtain, I just get pulled right back into the bog. Tonight I finished off a few more ridges while watching romance blossom between Brad Pitt and Angelina Jolie in Mr and Mrs Smith. Nothing like a mindless action flick for cranking out some knitting. And some fiber-equipment-buying plans.

Posted by Splindarella at 1:00 AM

Wow! Looks like you had a great day! Now you've got me thinking I should try dyeing.