All Hail the Moebius Scarf! 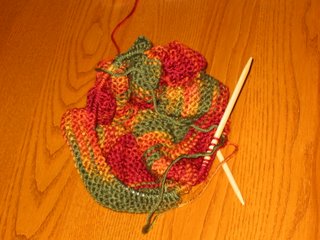 OK, so it may be a bit early for hailing since the scarf isn't even officially finished yet. As you can see, it looks more like a wool bath puff (albeit a beautifully-colored bath puff) than an actual scarf, Moebius or not. But I do promise you, it's a genuine Moebius scarf, knitted all in one piece lengthwise along the outer edge of the Moebius curve. This means my circ is twisted into a figure-8 as I knit and made my hands cramp up for the first few rows, but otherwise this has been a real hoot to knit. It's plain ol' garter stitch, and I may finish it off with an I-cord edging, but I just can't seem to put this project down. (Maybe because I just can't wait to wear it!)

Well...on second thought, I have managed to put my scrumptious scarf down at least once this week; tonight, in fact. I stopped by Michael's today because I had a 40% off coupon just burning a hole in my pocket and much to my surprise I found both Paton's merino wool and SWS on sale for a dollar off per skein. Not dirt cheap prices, but a buck's a buck. I bought one SWS in a gorgeous blue colorway and four of the merino in four different colors (deep purple, funky green, denim blue and blue marl) to make Christmas gifts of felted bowls. Tonight I resisted the siren song of my Moebius scarf and so I could experiment with the SWS and add a slightly different twist to the One Skein pattern to keep the lip of the bowl from curling during felting. Now that it's all knitted up (boy-howdy, do I love how fast that pattern works up!) all I need to do is felt it and see if it's the final pattern I want to use for making my presents. Filled up with some nice chocolates and accompanied by a donation to Heifer International in the recipient's name, it should make a lovely holiday gift.

And if you've never heard of Heifer International, run don't walk to check it out. They help alleviate poverty by providing poor people around the world with domestic animals (cows, goats, chickens, llamas, alpacas, water buffalo, bees...you name it and they probably have it) and the training needed to make a living from them. If life has been good to you and you'd like to give a little to someone who has less, consider making a donation to Heifer International.

*climbing down off soap box*

Linda I like the idea of felted bowls for Christmas gifts. I think I will have to make my way to Michael's tomorrow while the sale is still going on. Your mobius looks beautiful. I love the colors. I want to try it sometimes but I have too many projects in the wings so it could be a while.

Love the Moebius! I started one last year but ripped it apart because I didn't like the yarn. Now I can't remember how to cast on. :)

THE KNITORIOUS MRS. B said...

Hi! Just to tept you further, the paton's SWS knits beautifully in Iris Shrier's Multidirectional scarf pattern. i did one in the Pink and green sws