If you're gonna play, you gotta pay, right?

I got to spend the whole weekend at Rhinebeck, sans husband and child, to indulge my fiber fantasies. And for the past 24 hours I've been working like mad to catch up on neglected housework/schoolwork/work-work. 'Sokay, though; NYS&W was well worth it!

If I learned anything from my first trip to NYS&W last year, it was GET THERE EARLY! The doors officially opened at 10am; I arrived on Saturday at 9:45. There were already so many cars that the lot closest to the entrance gate was full; naturally, the car right before me was the last one in. I was then shuttled across the way to a farther lot (but one closer to the exit, which served me well in the evening exit madness), where I parked and gathered my "survival gear" -- bottled water, empty tote bag for purchases, knitting project (of course) and, oh yeah, a wad of cash. Can't say I didn't come prepared. $15 and one two-day pass later, I was inside the gate with an estimated 10,000 other eager fiberistas (and -os, not to be sexist or anything). By the way, that number is no exaggeration; on Sunday morning the people at the gate said that's the official estimate of how many people passed through NYS&W on Saturday alone. Woo-eeee!

Iknew exactly where I wanted to stop first: Journey Wheel, though I did get sidetracked just inside the gate by the stand of NYS&W souvenir clothing. I remembered the line at that stand last year around the middle of the day, and wanting a momento that wouldn't get knitted, felted or otherwise fiber-ized, I made a quick purchase of a denim shirt with this adorable little lamb logo and (NYS&W-2006" over the left breast. Then, it was on to the Bosworths and their incomparable spindles. 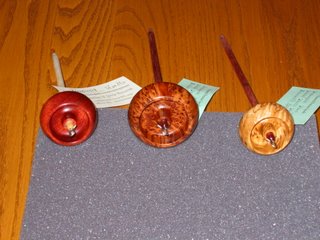 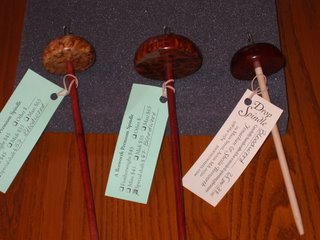 No photos in situ, sorry -- there was just no time! When I got there, my friend L was just finishing up a special order and picking out the at-hand spindles she wanted. I nudged my way between three or four other Bossie fans and picked out the beauties you see above -- no easy task as every spindle was unique and one was more beautiful than the next. I dropped a fair chunk of my cash right then and there, but it was justified (as if I need to justify this) because I got one of the spindles at half off -- half off! Buy 5 spindles in one year and you get a 6th at half price, and I'd already bought 3 this year; it would have been a shame -- no, more like a crime -- to lose the credit towards a half price Bossie. Sheila kindly held onto my spindles till the end of the day since I was far too nervous about breaking one to carry them around with me, and off I went to the Goldings, hooking up with my friend IV along the way.

May I just say that the ultimate, bar-none experience for me at Rhinebeck this year was spinning on Tom Golding's Flock of the Shepherdess spinning wheel? Here she is in all her glory, and let me tell you, the photo does not do her justice at all: 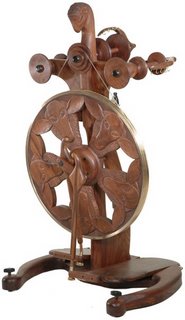 I don't usually anthropomorphize objects -- my spinning wheels do not have names, nor do I refer to them by human-type pronouns -- but this wheel was a goddess. If I ever hit the lottery, I'm buying a Golding wheel and a new house with a raised dias under a skylight to put her in. Short of that, I'm starting to save up now and hopefully sometime before Tom carves his last wheel I'll be able to afford one. Feel free to donate to the Buy Splindarella a Golding Wheel fund any time....

After grudgingly moving aside so some other not-nearly-as-nice-as-me-but-I-realize-I-have- to-share-anyway person could try the wheel, IV and I bounced around the rest of the festival.

Actually, "bounced" isn't quite the right word; "were bounced around like ping-pong balls inside a washing machine" was more like it. Remember, we're talking 10,000 people here, folks! All crammed inside a handful of barns pawing over fiber like sheep had just been declared extinct. I swear, one line was so long I actually asked the people if the yarn they were holding was free. "Nope," said one woman, "It's Socks that Rock. We're here for the colors!" It's just that kind of madness that made me hit the Bosworths at the sound of the opening bell -- we all have our favorites, and that one happens to be mine...though one of these days I'll have to get my hands on a skein of Socks that Rock to see what the fuss is all about.

And now since DH is making let's-get-to-bed noises and I really should be somewhat awake tomorrow at work, I'll end here and pick this up later, at which time I'll show off my other cooler-than-cool purchases and recount my brushes with fame -- both of them -- at the fest.
Posted by Splindarella at 10:18 PM