OK, I freely admit that my promise to post about "F.O.s Galore!" may have been just a tad bit excessive. Perhaps "F.O.s -- Two of 'Em!" would have been more accurate. Lame, but more accurate nonetheless.

Anyway, I have two -- count 'em, TWO -- F.O.s to show off. I would have had three (would that count as "Galore" I wonder...?) except that I got so very excited to give the yellow/orange/pink baby kimono to my co-worker that I didn't even take the time to photograph it. So picture, if you will, a brightly-colored garter-stitch baby kimono with crocheted ties and an adorable little eyelet trim down the front. Got it? Good. Let's count that as Unofficial F.O. #1.

Moving on. My first Official F.O. of the post is this one: 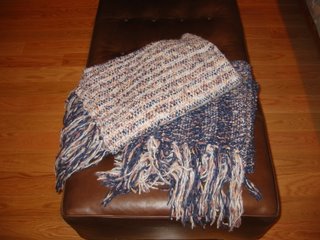 The wrap/throw on top is Pebbles on the Beach, which I finished off last week and which I've decided to give DH for Christmas (or maybe his birthday, depending upon how far along I get on his handspun and knitted skullcap by November). You can also see Pebbles in the Sea peeking out from below, which was my first Pebbles throw/shawl and which I've decided will go to our friends the Js. These throws were so very easy and quick -- the most labor-intensive part was warping the loom -- that I really would like to make at least one more. Not just yet, though; I have to start concentrating on making more of these: 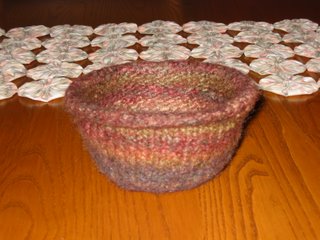 After many false starts and mishaps, I've finally found a yarn I like for the One Skein felted bowls. This is Paton's SWS (Soy Wool Stripes). One skein used doubled on size 15s is just about exactly enough for one small bowl. The colors get somewhat muddied in the felting (although the flash in this photo really shows off the colors to their best advantage), but overall I like the way the bowls come out. I'm going to fill them with some nice chocolates (Lindt? Bacci? Any other individually-wrapped favorites that people would like to suggest?) and that'll be this year's gift. The best part is they're super-simple and require relatively little knitting per item. Good for my wrists/hands, which are still somewhat dicey at best.

And now that that's settled, I can sit back and wait for the weekend, when I'll be off to enjoy the festivities up at Rhinebeck at NYS&W. Woo-hoo! Fiber arts mecca, here I come! :)
Posted by Splindarella at 10:10 PM

ooooh, i like the one skein bowl! i bought two skeins of SWS a few weeks ago when it was on sale because it's SO pretty. i still haven't quite decided what to do with it... haha.