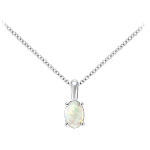 So, there it is...the contents of my small, lightweight "Mystery Box," my anniversary present from DH. Kinda hard to tell from the photo, but it's an opal necklace. I've never owned an opal before -- they're pretty amazing, shot through with all the fiery colors of the rainbow. Romantic that he is, DH said he chose it because he liked all the colors and because, in his words, "Everything else they had was really ugly." Ah, men and their silver tongues.

DH actually made me laugh when he told me some more about how he came to pick out this particular present. It was his second choice, he said. First, he'd looked up which anniversary the 7th was, and he discovered that it's the "wool" anniversary. Great, he thought; he'd get me some wool for our anniversary. Trouble was, he said -- get this -- he didn't know where to find any wool.

I nearly keeled over from laughing so hard. It's not like boxes of wool don't arrive with a rather shocking regularity at our house. It's not like I don't have a list of fiber-related bookmarks on our computer a mile long. It's not like there aren't bags and boxes and skeins of wool all bearing the stamps of a variety of shops, all of which are accessible by phone or fax or internet. But he didn't know where to find me any wool. Honestly, it's amazing that man manages to dress himself without help.

Still, his second choice was terribly sweet and very, very pretty. In fact, I haven't taken my new necklace off since he gave it to me. Wool I can -- and do -- always buy for myself. But, an opal? Only from my DH.
Posted by Splindarella at 10:08 PM

oooh, your anniversary gift is pretty!!!! that's hilarious about your DH not knowing where to find wool for you!

i would love the zucchini brownies recipe... it does sound strange, but i've had zucchini muffins and those were pretty good, so i'm open to something new... : )

the moss grid towel worked up really well in the cotton on 6s. i haven't really tried it for dry time or anything, but it feels really nice and i could see it being good as a bathroom towel. not as classy as linen, maybe, but much more affordable (and denser)!

DH is seriously going to get 'Husband of the Year Award'.