You Know You Have a Problem When...

...you deliberately charge your yarn purchase to the card that's in your name only so your husband won't see the bill for it.

That's right, folks. After dropping serious cash at NYS&W less than a week ago, this past Friday I dropped yet more cash at the Knittingsmith. *sigh* You gotta admit, though, these are some pretty sweet purchases: 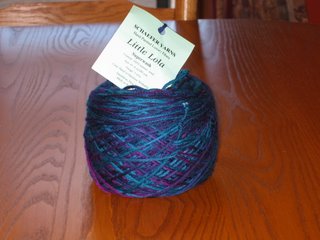 That's the small purchase up there: a single skein of Schaeffer "Little Lola" superwash merino in an absolutely gorgeous colorway of purples, blues, teals and greens. This is actually the yarn I saw after I'd already picked out the big purchase items. Weak and willpower-less person that I am, though, I absolutely had to have it, even though...well, I don't even think I need to mention that I'd already spent enough money the past weekend, and on top of that I was planning on buying the yarn you see below. What can I say? Schaeffer's Little Lola is the yarn I'm using for my moebius scarf (more on that in another post) and I just love it. That's L-O-V-E, with a capital every letter in the word. When I saw this colorway, damn the torpedoes and full speed ahead with the credit card, it was going to be mine.

As for the big purchase.... 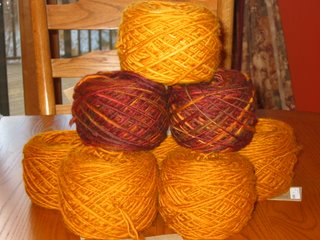 Just feast your eyes on that big ol' pile of Manos del Uruguay. I've been wanting to make an EZ fitted bog jacket for awhile now...been planning on cobbling together stash yarns for it, in fact...but what can I say? The Yarn Harlot, always an idol of mine but now even moreso since our micro-encounter at Rhinebeck, claims that the fumes in a yarn shop cause her to do things she otherwise wouldn't. I may just have to claim the same defense, since what else could induce me to see one skein of yarn (the variegated in the middle of the pile), fall head-over-heels in love with the colorway and subsequently build an entire friggin' bog jacket around it?

Let it not be said that I jumped -- er, went forward with this plan lightly, though. I prepared. I spend three hours in the Knittingsmith working out the details with the help of Penelope, shop owner, designer and knitter extraordinaire. I pored over the bog jacket pattern in Knitting Around and agonized over which striping pattern to follow as I selected colors. I weighed the pros and cons of incorporating Manos into the I-cord border and eventually decided to use a more even, less thick-and-thin wool for the border and the accent striping. By gawd, I even bought a brand-spankin'-new Addi Turbo size 10 circular needle for the occasion. Never mind that my freakin' finger has been acting up again and I've temporarily put my knitting aside in favor of spinning and weaving to give the tendon a rest. I'm committed (or perhaps I should be). I figure I'll start my fitted bog jacket after Christmas, when the holiday knitting is done, I'm blissfully on break from work/school and all I have to worry about is how to keep Baby M occupied long enough to get any knitting done while she's awake.

You don't want to know what the bill came to. Frankly, I don't want to know. It's not like I don't have yarn at home. It's not like I'm crying out for projects to work on. I honestly don't know what came over me. All I know is I ducked into the Knittingsmith to wait for my car to be inspected at the garage next door and three hours later I emerged with a bag full of yarn, a credit card receipt and a vague lightheaded feeling that may be related to those fumes Stephanie Pearl-McPhee talks about.

Oh, and the next day I stopped off at Michael's for more Paton's SWS.

"It's for a good cause," I told myself. "I really don't like the way the Paton's merino felted up, but the SWS -- with the new 'n improved garter stitch edge on my bowls, the SWS felted up like a dream. Of course I should pick up a few more skeins to make up into bowls. I'll still use up the merino, maybe add some needlefelted designs to those bowls to perk up the solid colors...but it would really be unfair to give only one person in my family an SWS bowl. I'll just get enough SWS to finish off the 'family' gifts and then use the merino for the 'friends' gifts. Everyone will be happy." Especially yarnaholic me.

You understand that when such levels of justification and deception are reached that there's a problem. Which is why I here and now announce that I've joined (drum roll, please)....

In case you haven't heard, Stashalong is the Atkin's Diet of yarn. You go cold-turkey -- no yarn purchases AT ALL for the duration of your participation, though books, tools, etc are still fair game. Let's just call yarn the big, fat carbohydrate of the Stashalong program.

Once you've decided on your committment length (anything from a month on up) and joined the blog, all that's left is for you to knit from your stash and only from your stash for that length of time. Post to the blog when you're feeling weak and about to buckle over that scrumptious silk bump on ebay; post when you're overjoyed at finishing a long-outstanding UFO or finding yourself two skeins of Debbie Bliss lighter than last week.

Let's hope so. I start tomorrow.

Which means if I hurry, I can pop out to Michael's and grab another few skeins of SWS, just in case.
Posted by Splindarella at 3:53 PM

the best of luck on going cold turkey with stashalong!

oh, and the purpley yarn is gorgeous! ^^

LOL! I did the Stashalong last year and it really helped. Of course now I have lots of ideas with the "charity" knitting going around about how going to reduce the stash! Good Luck!

about your comment on my blog... it sounds like a good idea to me! i really like how the bunnies turn out, they're pretty cuddly, and they don't take up a huge amount of yarn. mine always end up with big rear ends, though, haha! if you make the ears using the modification, be sure to remember to reverse the shaping on the second one or you'll have two of the same ears and it'll look funny (sadly, yes, i am speaking from experience).

on a totally unrelated note: do you think the SWS would be soft enough for a scarf? i think it's a little bit itchy, but i may just have a sensitive neck. i knit up a bit in herringbone stitch and absolutely love it, but i'm worried the recipient will think it's too itchy to wear...