What I've Been Up To Lately

What I haven't been up to lately is getting my Christmas presents done. Once the felted bowl idea went south I sort of put extended-family/friend Christmas gifts on the back burner. But, with a chill in the air and Halloween right around the corner there's no more putting it off; I simply need to decide what I'm doing and then set about doing it.

I have been working on other things, though. Here's Pebbles on the Beach, the second shawl/throw made from the dollar store Pebbles novelty yarn I picked up earlier in the year: 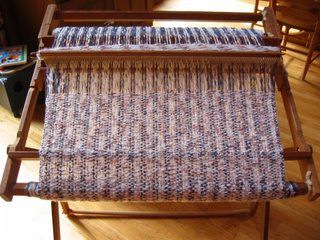 DH actually really liked the first shawl/throw, Pebbles in the Sea, so I was thinking of putting it aside for him as a Christmas gift. Then he saw this one and decided he liked it better. So, this one will be for him and the other one will go to our friends the J family in Sweden. At least it's the first one completely finished (well, except for a final wash and trimming of the fringe) -- appropriate as it needs to be mailed and not simply given on Christmas day.

I've also been spinning up a storm for DH: 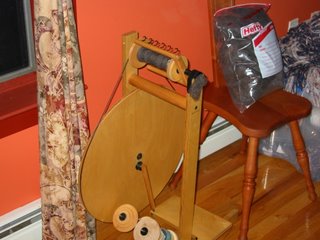 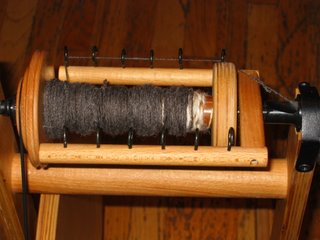 He's been asking me to knit him a skullcap so I figured I may as well go whole-hog and spin the yarn as well. This is some nice, soft grey wool from The Sheep Shed Studio's Big Bale fiber. Although Carol advertised it as ideal for felting it was so nice and soft I really wanted to spin it instead. It's spinning up really nicely, too, and with the nice sunny weather we've had for the past couple of days all I want to do is sit out on the deck and spin.

But, nice weather or no, I really need to get gift knitting going. As soon as Pebbles on the Beach is finished, my next task is to get gifts for my two cousins' families finished. Wish me luck....
Posted by Splindarella at 11:37 AM

i'm trying to be really good about getting christmas presents started because i have SO many christmas things to knit... it's my first knitterly christmas and everyone wants a handknit!

if you happen to run out of pebbles at any point and need one more skein, i have one in blue that i don't really see myself using any time soon, hahaha.

You asked about the yarn I was using for the baby sweater on my blog. It is Plymouth's Baby Rimini. I like the colors but it isnt my favorite yarn to work with. There is a thread that runs through it that doesn't give but it is very soft and I am sure the final product will turn out nice if I ever get motivated to finish it. Hopefully this weekend.

I *love* the Pebbles shawl/throw! I've never wanted to weave before, but I do now. If I had the space in my house, I'm sure I'd have started already. Your weaving is inspiring! By the way, my husband hasn't been able to find a blacksmithing class locally. It's weird because Louisville has a million things going on for a small-ish city. Maybe one day. :)