Sunday at Rhinebeck and My Brushes With Fame

If Saturday was the day for me to run into all my friends by chance at Rhinebeck, Sunday was the day for me to completely miss everyone I was trying to meet up with -- never mind that there were ten freakin' thousand people there on Saturday and not nearly that many there on Sunday. No worries, though; it just meant I had more freedom to wander aimlessly around all the booths with no one to remind me I'd been through the same barn ten times already (though by the end of the day I would have appreciated someone who could at least let me know where the booth with the amazing handwoven Romney rugs were -- I wanted to get some more tips from the maker before leaving!).

My first stop was at one of the few spots IV and I missed on Saturday: Little Barn Fibers. Bags and bags of spinning fiber at wildly low prices. Natch, I couldn't leave without lightening their load a bit (after all, I wouldn't want them to have to cart leftovers all the way back to their store in Alabama...that just wouldn't be right): 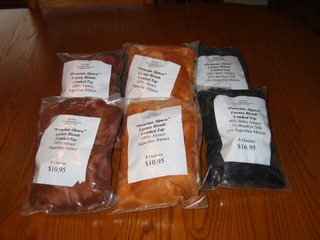 Aren't they stunning? You're looking at 2 pounds of 100% baby alpaca, a pound each in a deep chocolate brown (left) and a rich, dark tumeric (center). On the right is a pound of black alpaca/merino/silk mix...yummy! I was sorely tempted to pick up some cashmere as well, but I held back. There's always their website to order from (I wouldn't want them to go into a sales slump in the middle of the year, after all...it's practically my civic duty to help keep them in business by ordering fiber from them year-round).

I also picked up some fiber tools I'd been wanting for awhile, and one I had no idea I wanted till I saw it at Rhinebeck: 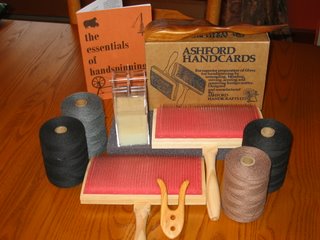 Since last year's NYS&W I've been kicking myself for not picking up a pair of brand-new Ashford handcards when I saw them on sale for the rock-bottom price of $30. Sad to say, this pair cost a bit more than that, but at least now I'll be able to blend colors and fibers. The handspinning book has what Susan of the eponymous Fiber Shop claims are the best directions for handcarding out there. The clear rectangular box is a McMoran (sp?) balance so I can figure out how many yards per pound my handspun is, and from there I can figure out how many yards I have so I can stop worrying about running short during every project I undertake. The spools are rug warp in brown and black, and the wooden implement on top of the handcard box is for beating the weft of a rug into place (yes, I've decided to load up on Cotswold curls from The Sheep Shed Studio and make my own rugs; thank you again to the kind vendor whose name I didn't catch who patiently explained how to make them -- I really wish I could have found your booth again on Sunday). Finally, the small wooden tool in the very front is a lucet. This is the tool I had absolutely no idea I would want until I saw it used and saw the beautiful cord it turns out. I'm not really sure when I'll need cord of my own making, but dammit when I do need it, I'll be turning it out on my lovely wooden lucet.

And of course, no photo montage of NYS&W would be complete without this: 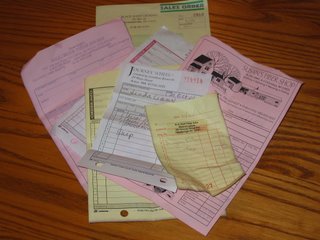 As for my brushes with fame, BWF #1 came as I stood in the weaving-supplies booth contemplating my lucet purchase. A woman walked up to me and asked, "Are you Amy?"

"Er, no," I replied. What was this, I wondered...someone playing Rhinebeck Bingo? A not-so secretive Secret Pal 9 pal?

"Oh...you know, you look just like Amy, the Knitty editor."

Wow -- I was seriously impressed. I mean, that anyone could mistake me for a person who edits a knitting magazine.... Was my knitted alpaca dickie that awesome that someone could actually believe I was on par with someone who does knit-stuff for a living??

I did look up Amy Singer and except for the fact that we're both white and female she really does look nothing like me. But that didn't stop me from basking in the artificial glow of someone else's fame for just a moment. So, thank you, anonymous lady who obviously forgot her glasses at home...I'm honored that you thought I was someone as cool as the editor of Knitty.

BWF #2 was considerably more exciting than BWF #1, albeit far briefer. There I was standing outside the ladies' bathroom trying to use the public phone (which, for reasons I cannot understand, refused to accept coins for long distance calls and which, for still more reasons I cannot understand, insisted on classifying a call to my home phone "long distance" even though it was within the same area code and the same county) and just as I turned away in utter and complete frustration, who did I see breeze right past me on her way to the loo?

None other than Stephanie "Oh my freakin' gawd it's the Yarn Harlot!" Pearl-McPhee!!!!

Yup, the Yarn Harlot herself, in the flesh, glasses, green sweater and all. Thankfully, she was gone so quickly I didn't have a chance to make a total fool of myself ("I read all your books!" "I love your work!" "Can I take a picture with The Sock?"), but it was just a little bit like glimpsing knitting royalty.

Knitting royalty that uses the toilet just like you and me.