The Definition of Irony, and More....

Before I get to any fibery news, I have to relate the following story:

Today, I witnessed the walking, talking definition of irony. A couple, one man and one woman, was walking down the street near Union Square. The man wore Dockers and a button -down; the woman wore jeans and a tank top. Buckled tightly around the woman's neck was a studded, black leather dog collar about 2 or 3 inches wide. At the very back, embedded in the leather of the collar, was an iron ring about an inch and a half in diameter. And attached to a back loop of the woman's jeans was a metal dog leash.

Ready for the irony?

As they're walking along together, the man's hand resting possessively in the woman's back pocket, I overhear him soliloquizing on the state of music today.

"I grew up in the Golden Age of hip-hop," he said. "Back then, hip-hop was at its best. But this generation, this generation is just degrading. It's degrading to women."

Only in New York.

Also only in New York: The Strand Bookstore, with its famed 18 miles of books.

Of course, within those 18 miles of books, only about a foot-and-a-half of space is devoted to knitting. I kid you not. When I asked why, I was told that knitting is just so popular that the books fly off the shelves as soon as they hit. I could buy more books about quilting, needlepoint and cross-stitch than I ever thought could possibly exist, but finding a good knitting book in the Strand is an exercise in patience and diligence. 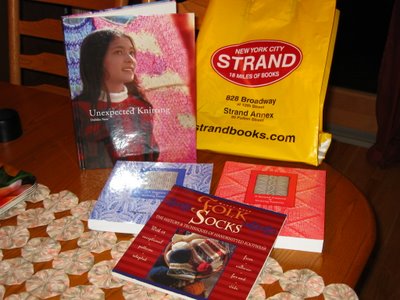 DPNs were almost drawn over the Debbie New as an enthusiastic fellow-knitter snatched that gem off the shelf right out from under my hot little hand. But I kept my cool (and my grip on the Barbara Walkers, which said competition was also eyeing enviously) and hung around pretending to flip through a volume on knitting for kids until the woman decided she didn't want Unexpected Knitting after all and put it back on the shelf. Down I swooped and just like that I had four wonderful new volumes to add to my collection.

My reviews so far (based on a few minutes' browsing in the store and about an hour's subway ride afterwards):

Barbara Walker's First and Second Treasuries: What's left to be said? Two of the four definitive stitch dictionaries. I now have more stitch patterns than I will ever possibly use in my lifetime. So, why do I feel compelled to buy her Third and Fourth Treasuries as well?

Folk Socks: I'm a huge fan of Folk Shawls, but I did pass on Folk Hats when I got honest with myself and accepted the fact that I would never, ever knit any of the hats in the book, not even for my year-old daughter. Folk Socks seems like a good compromise: a book with lots of interesting stuff to read about the history of sock-making around the world plus some accessible, fun patterns that I might actually try. Maybe this will inspire me to put the few balls of sock yarn I have to good use.

Unexpected Knitting: All hail Debbie New! She is my guru of knitting, the goddess of knitdom. She is the person I want to invite to my "fantasy dinner party," where I can have any guests I want, living or dead, real or fictional. The woman has knit a boat -- a boat! She has also knit a giant wall hanging portrait of her grandmother that looks like one of those mosaic puzzles that you have to stand a few dozen yards away from to see the picture. She has knitted a cape that looks for all the world like Eric Carle's butterfly from The Very Hungry Caterpillar. She has knitted a sculpture that makes music when you touch it. I kid you not. Debbie New is beyond words, and I absolutely love Unexpected Knitting. I got so engrossed that I completely missed my subway stop and wound up riding to the very end of the line. I want one pinky-finger's worth of Debbie New's talent and creativity. Short of that, I'll take this book.

Posted by Splindarella at 10:17 PM

Hi Linda! I've never heard of Debbie new, but now I just have to do some research, she sounds very interesting :)

I love the ironic story about the couple! I can see them before me *lol* I've actually been to New York many times, I lived in Toms River, New Jersey for a year and went to NY lots of times! I hope to come back some day, I loved it!

Shut up! Knitting books besides those dog-eared Erica Wilson's Needlework at The Strand? I'll be the one with double-points drawn ;)