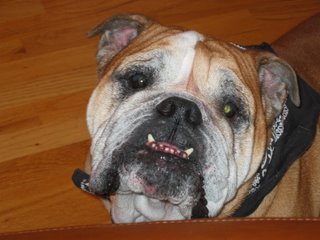 At shortly after midnight this morning, our bulldog, Fatboy, died.

It was completely unexpected. We had had him to the vet that very afternoon to get his bordatella vaccine, and he had been just fine.

Shortly before we went to bed last night, Fatboy's breathing became even more labored than usual. Now, if you know bulldogs, you know that they snort, they snore, and by the simple act of breathing they make a good ol' racket just about all the time. So, we weren't overly worried. Fatboy's breathing would get louder and faster in the heat or after running around, but after resting it would always go back to its normal dull roar. We all went to bed thinking nothing was wrong. 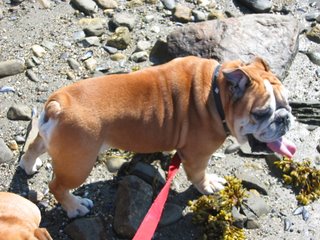 Fatboy on the beach in Maine, summer 2003


But shortly after midnight, our other bulldog, Kobe, woke us up with her barking. At first, we thought she had to go outside; instead, she was trying to let us know that Fatboy had died. His face was all wet -- she had obviously been licking him -- and his body was still warm and soft. It must have just happened.

Today was a pretty awful day for all of us. We were up till after 2am, crying and caring for Fatboy's body, our other dogs (Kobe and our shep mix, Shasta) and baby M. We finally got to sleep only to get up a scant few hours later for work. DH's boss, when informed of the situation, told DH to take the day off, which he gratefully did. I didn't have the same luxury. So, after we took Fatboy to the vet for cremation, DH and I drove to his parents' house where he stayed with M and the dogs while I went in to work.

I feel like a wreck. My eyes are sandy and have been burning for hours. I have a headache and am exhausted in body and spirit. I keep wondering if there was anything we could have done. What if...? What if we had gone to work yesterday instead of staying home (which we did because on the way to work the car got a flat and the baby got sick all at once)? Maybe if Fatboy had spent the day in the cool basement as he always does when we're at work he would have been okay. Or what if we had given Fatboy a bath yesterday afternoon? We had been planning a bath for him for days -- maybe the cool water would have kept him from overheating, which is what we think in the end caused his death.

DH says there's no point in thinking about "what ifs," and intellectually I know he's right. DH says it was probably just Fatboy's time. At least he didn't suffer; he didn't go through a long illness and a lot of pain...just slipped into sleep and was gone.

Poor Kobe. She and Fatboy have been together all their lives. She's so sad, and so stoic. She just walks mournfully around the house and, when she's not doing that, she sleeps.

I want to remember Fatboy as he was: a happy, good-hearted, good-natured dog who never really knew his own strength and was always eager to jump in the nearest lap and slobber all over whoever and whatever came within reach. 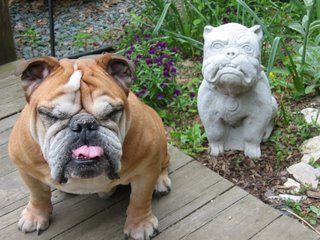 Posted by Splindarella at 10:41 PM

I am so sorry for your loss. I know how tough it is to loose a dog that's a real part of the family. It looks like he was a real character and a great dog.

I wanted to express my sympathy...I too have lost a beloved pet and it is very hard...

So sorry about FatBoy. It's very difficult to deal with a sudden death. I've had a dog die suddenly and it's very tough. In my case, I had a nercopsy (sp?) performed and it revealed that my cocker spaniel had a very invasive form of cancer.

So sorry to hear this.... My own dear basset hound, Rufus, also died unexepctedly Sunday morning, and it's so hard to believe we won't see his furry little face again...